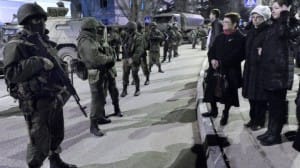 Today, Ukraine draw the attention of the entire world as one of the strategy elements of the world security and the new, globalized, world order. In fact, the current crisis in Ukraine is the ultimate manifestation of the clash of two different civilizations, two different philosophies and geopolitical interests. Ironically, Ukraine becomes a mere puppet in hands of the world puppeteers, who use Ukraine in their geopolitical game. At the moment, Ukraine, which has recently overthrown President Yanukovitch after several months of the social unrest, confronts a new and even more serious problem ”“ the problem of the emerging pressure from the part of superpowers, such as Russia, the EU and the US, while the resolution of the current crisis in Ukraine may determine the future development of the world.

At first glance, the major cause of the current crisis in Ukraine is the revolution which ousted President Yanukovitch and brought to power the opposition. However, the struggle for power in Ukraine was rather the result than the primary cause of the crisis. The true cause of the crisis was the geopolitical choice Ukraine had to make in November 2013, when Ukraine had got the opportunity to sign the association agreement with the EU but would-be President Yanukovitch refused from the agreement justifying it by economic concerns and interests of Ukraine, which he presumably did not want to sacrifice for the sake of membership in the EU. However, critics of President Yanukovitch admitted that it was the enormous pressure from the part of Russia, which Ukraine is dependent upon in terms of energy resources supply. Anyway, this refusal caused the social turmoil in Ukraine but, more important, it has revealed that Ukraine is subject to the geopolitical struggle between the EU and the US, on the one hand, and Russia, on the other. This struggle for Ukraine between the major world powers became the primary cause of the current crisis in Ukraine, which faces the problem of the annexation of Crimea by Russia.

Such profound interest of leading world powers to Ukraine may seem to be surprising, unless the strategic role of Ukraine in the geopolitical, economic, and military fields is taken into consideration. In fact, Ukraine is the bridge between Russia and the EU with the Crimea peninsula being the home for the Russian Black Sea Navy. The large part of oil and natural gas supply from Russia to the EU occurs through Ukraine with its extensive system of pipelines. The Crimea peninsula allows the Navy station there to control the Black Sea and nearby coastline. Moreover, Russia does not have any other base to station its navy in the Black Sea. Moreover, the new government of Ukraine leans to western values and closer integration of Ukraine into the EU, whereas ousted President Yanukovitch was inclined to the closer ties with Russia and its Custom Union.

In such a situation, the current unrest in Crimea, the involvement of Russian military and the possible military intervention in Russia is juxtaposed by the extensive political, diplomatic and economic support of the new Ukrainian government by the EU and the US. This crisis reveals the clash of Russia and the EU-US for the control over Ukraine. Russia attempts to preserve the sphere of its influence and maintain the status of the superpower capable to challenge the EU and the US through holding the Navy base in Crimea and maintaining its influence on Ukraine via military, political and economic tools. The EU and the US, instead, attempt to enhance their impact on Ukraine and integrate the country into the EU to expand its frontier up to the Russian border and to take the full control over the strategic transitional country between the EU and Russia.